The Schwerin Residence Ensemble is on its way to World Cultural Heritage status. On the following pages you can find information about the content of the submission and the status of the submission procedure. In April 2022, the nomination papers were presented to the city council and are now going to be translated (with status from April 2022). Within the following weeks, you will find information about some changes considering the focus of the Residence ensemble on the following pages.

“High point of European castle architecture in the historicist style”

The Schwerin Residence ensemble took shape in the 19th century within a unique cultural landscape and was designed for the Grand Dukes of Mecklenburg-Schwerin, both for outward show and for function. Surrounded by bodies of water and parkland and linked by many different sightlines, the administrative buildings of Court and State, the theatre, museum, artillery barracks, churches and palace are integrated into the city space, so that the Residence structure is still readily distinguishable today.

The core and aesthetic reference point of the ensemble is Schwerin Castle, which the young ruler Friedrich Franz II definitively remodelled between 1843 and 1857. The remodelling drew upon styles of previous centuries and was consciously guided by French Renaissance forms, in a clear expression of the Grand Duke’s kingly sovereign status among European monarchs. Older structural parts of the Castle, from the 16th century, were also brought into prominence to emphasize the successes of ancestors. New materials and modern techniques, such as the use of cast iron, were employed during the remodelling, thus giving a cohesive picture of an epoch poised between continuity and radical change.

Here you can find out more about the individual parts of the ensemble. 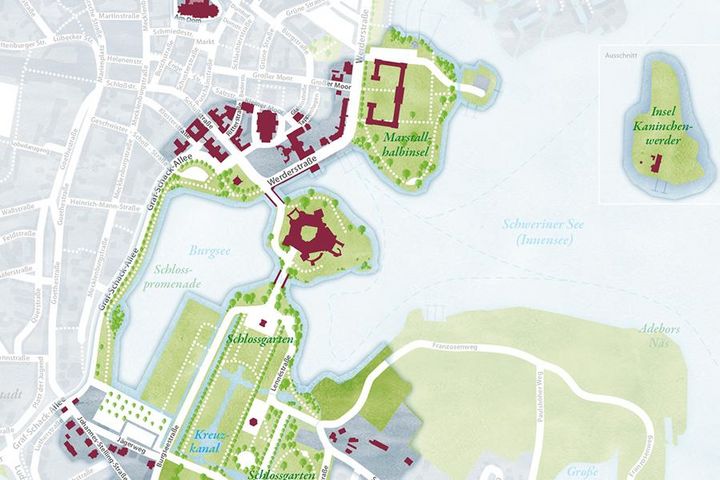 Tour through the Residence Ensemble