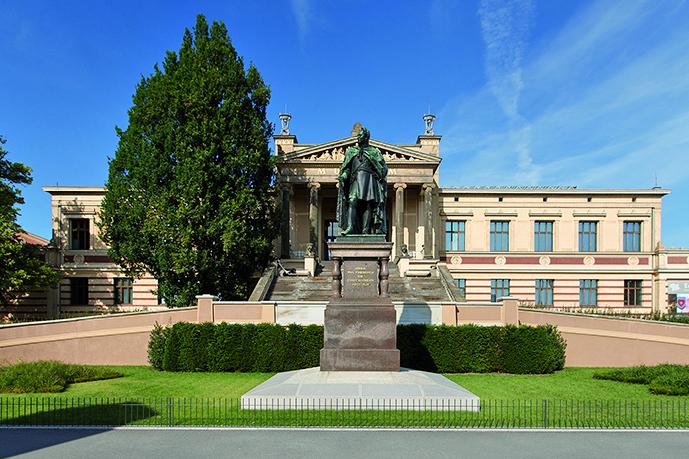 The Museum bears witness to the cultural interests of the Grand Ducal family, who not only patronized artists but also collected art treasures. Duke Christian Ludwig II started the process; he had a great love of Dutch art and laid the groundwork for today’s collection, one of the world’s greatest collections of works by Dutch masters.

When Grand Duke Paul Friedrich II moved the residence back from Ludwigslust to Schwerin in 1837, he planned to build a grandiose new castle on the site of the present Museum building. The old castle on the island was no longer imposing enough for a Grand Duchy after eighty years of absence.

However, in 1842 – just after the foundations had been prepared – the Grand Duke unexpectedly died and his son took over the reins of power. Instead of continuing with the new building Friedrich Franz II decided to extend and remodel the castle on the island as a sign of the continuing exercise of power.

Only the arrival of the reparation payments from the Franco-Prussian War after 1871 provided the Grand Duke with sufficient funds to build the independent museum so urgently needed for the wide-ranging collection.

This technically pioneering building is the main work of the Court Architect Hermann Willebrand. The historic ventilation system of his own devising still functions and represents the most advanced domestic technology of the time.

On 22 October 1882 the new Museum was ceremonially opened.

With the abdication of Friedrich Franz IV it also passed into the hands of the State in 1918.

In the Second World War the art stock was moved out; until the end of the war the building was used as a uniform factory and refugee shelter.

Since 1945 it has once again been a museum. Today it houses over 100,000 works of art and since 2018 is part of the Staatliche Schlösser, Gärten und Kunstsammlungen Mecklenburg-Vorpommern.

On 30 June 2016 the newly-built part of the Gallery of Old and New Masters was ceremonially opened, leaving more space for the modern works. The museum extension next to the gallery was constructed to strict conservation guidelines so as not to prejudice the application for World Heritage status.